I shot the king

I went out squirrel hunting this morning at Patuxant River State Park. I saw a squirrel when I entered the woods but I was too close to the road to take it so I just hiked deeper into the woods. It was a nice day to be out and about in the woods. After a couple of hours I packed up and went home, but not before shooting the King of Beers (I have to shoot something when I go out).

I live about 3 miles away from my rifle range, which is the county run, Hap Baker Firearms Facility.  They have 10 rifle lanes to shoot in, with target posting ranges at 25, 50, 100 & 200 yards.  They also have a pistol range, with I believe 10 lanes, where you hang your targets via the use of a pulley system.  I have only ever used their rifle lanes.  The facility is well run, by safe and experienced range marshals.  Cease fires are called every 30 minutes which allows you to safely get down range and post new targets.  For Carroll county residents, like me, the cost is $10/day.  Out of county residents pay $15.  An annual membership to the range is only $50.  Their winter hours are 10am to an hour before sunset.  Not a bad deal, but if you don't want to wait in line for hours, you'd better be there at 9:15am, like I was this morning.  I was happy to be one of the first people there this morning, and took my time posting my targets.

The rifle I shot today was my M1 Garand, which, judging by the serial number 3445767, was manufactured by the Springfield Armory in January of 1945, just seven months before the end of World War II.  For those of you who don't know this rifle, it is a .30-06, semi-automatic, military rifle.  This rifle replaced the Springfield M1903bolt-action rifle.  It was issued to US infantrymen, my Grandfather included, for use during WWII, though it was also used later in the Korean War and early in the Viet Nam War.  Like nearly all of the guns I own, this one too, was given to me by my father.  I am very thankful for it.  As long as I have owned this gun, I have not been able to get to a range and zero it.  Today I took care of that.  I shot from a bench rest, sighting in at 25 yards, then shooting at 100 yards.  At 100 yards, I could not see the bulls-eye very well but managed to group what you see in the picture below.  I had posted targets at the 200 yard range, but when I put them in my sights I couldn't make heads nor tails of them.  My eyes just couldn't see them.  I shot about 200 rounds through this rifle and really enjoyed it, grouped very well at 25 yards, and I believe would group the same at 100 yards if my eyes could only do it justice.

When I got back from the range, I set to work cleaning the barrel.  It's important that you use a muzzle guide when doing this, to avoid damaging the crown.  Doing so, takes a little more time, than usual, but it's worth if if you want to properly maintain the rifle and it's accuracy.  I had the barrel shining before I wiped it down and returned it to the rack.  Looking forward to getting out to the range again soon!

This morning I took the .17 caliber out for "a walk in the woods" looking for grey squirrels who might possibly turn out to be tonight's dinner.  Unfortunately (for me) I didn't see any of the little guys out and about.  I saw plenty of tracks.  I saw some poop.  I even saw nut shavings from squirrel breakfasts enjoyed at the snowy base of some trees.  But as my father always says "you can't make soup out of tracks".  I suppose one could make soup out of poop, but I don't believe I will ever know for sure. I hope I don't.

The weather this morning was beautiful, albeit a chilly 32°.  I enjoyed slowly meandering through my usual hunting grounds at the Frederick Watershed.  The ground was covered in 5 inches of firm, crunchy snow.  These snow conditions took the stealth out of my hunt today; each footstep broke noisily through the crusty top layer.  I stopped often, leaning against a maple tree, to peer through the white forest and listen to the silence.  Thick snow; large clustered flakes, fell steadily, and at an angle that hit my face and melted.  Occasionally I would lift my rifle and sight through the scope, but after a while, the ends of my scope became filled with snow.  Blowing the snow out, left me with a film of fog.  I decided after a couple of hours, to head back to the truck and make my way back home.

Back at the ranch (Technically, a bunny ranch - I have two rabbits), I dried and cleaned my rifle over a pint of Saranac's caramel porter, and that unmistakeable, romantic fragrance that is: Hoppes' No 9.  I'm really happy with this gun, although because of the small caliber (.17) it can be a bit of a pain to clean if you don't have a brass .17 caliber jag for your cleaning rod.  My jag is plastic and tends to fold over on itself when starting a patch down the breech.  Luckily, I came a cross a great tip for .17 caliber rifles:  You can use the little felt pellets, intended for cleaning air rifles.  They work great.  I use a combination of patches and pellets until both are coming out of the barrel clean. 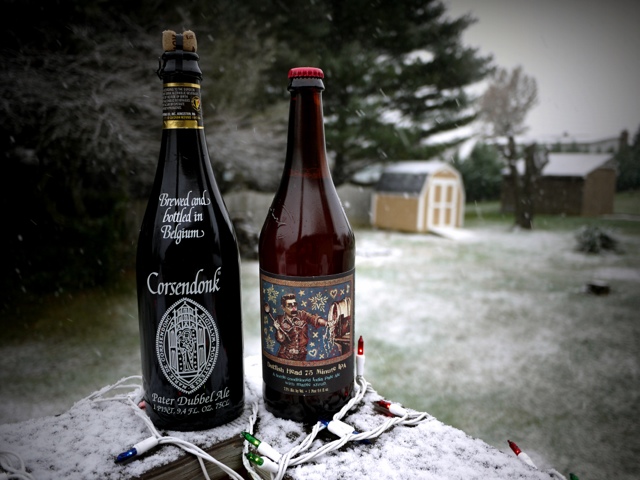 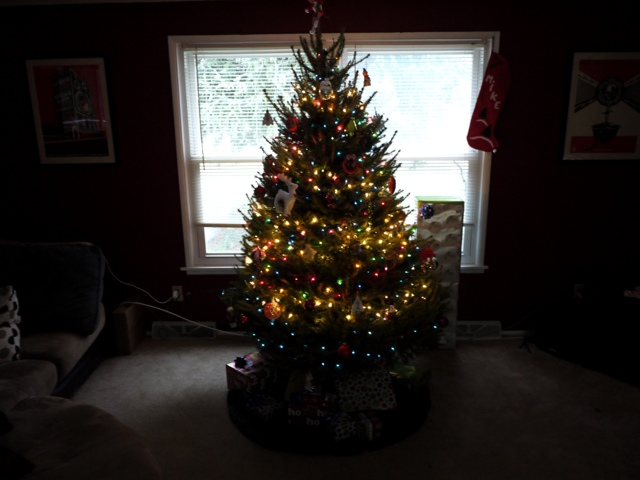 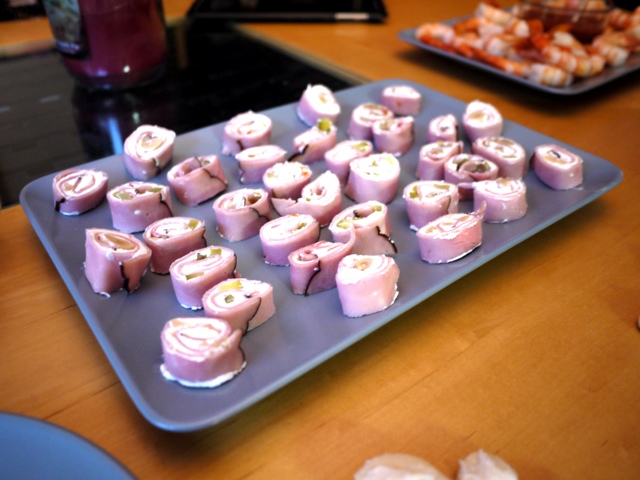 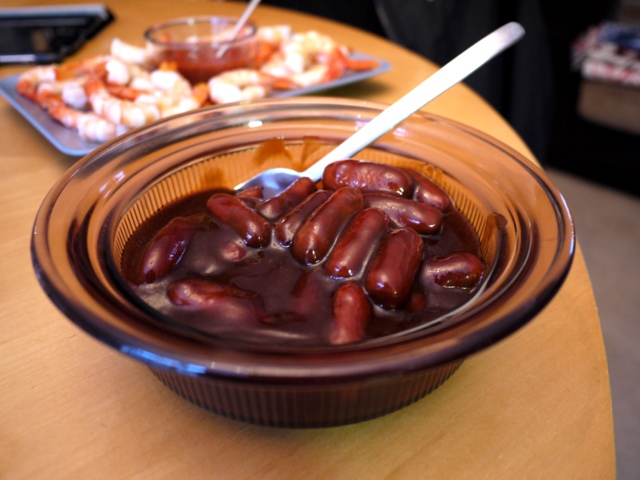 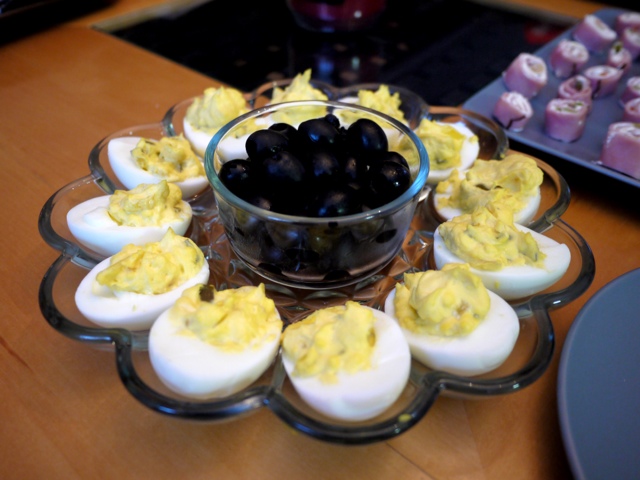 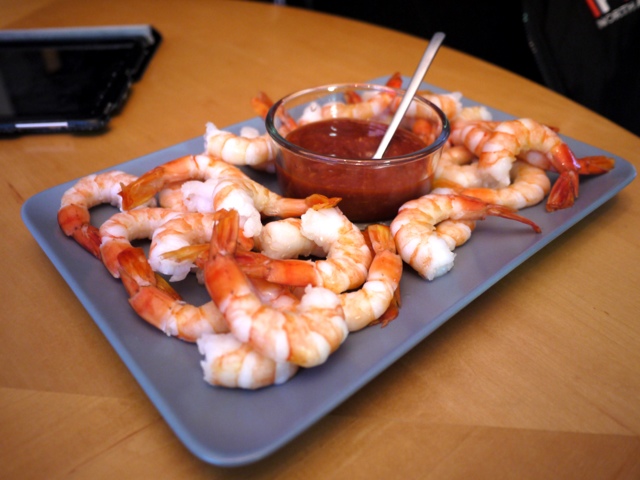 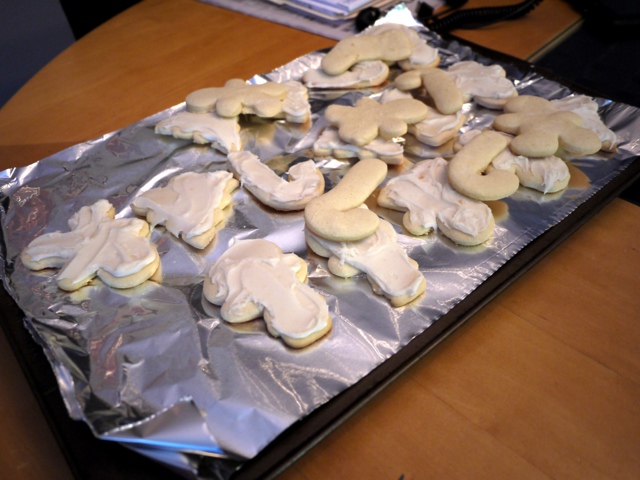 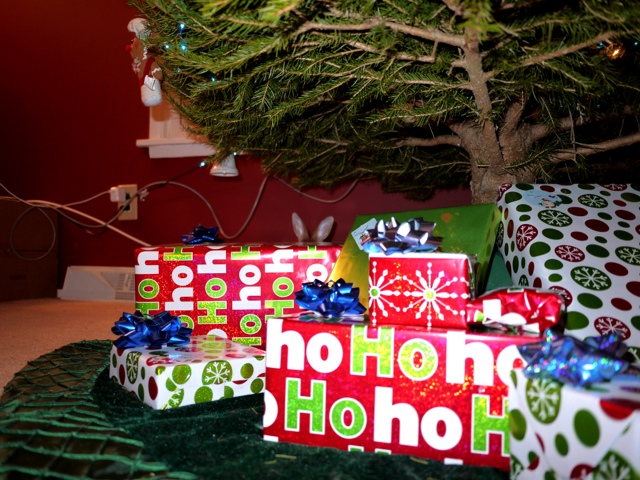 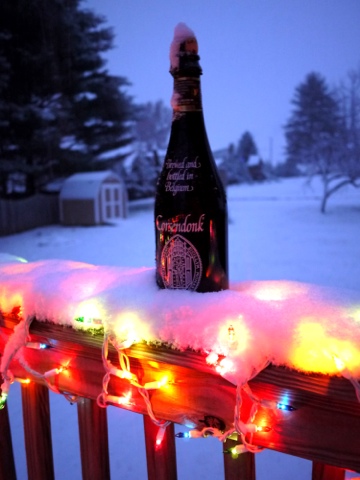 Email ThisBlogThis!Share to TwitterShare to FacebookShare to Pinterest
Labels: xmas

A friend and I drove up to my folks place and childhood home in Sherrill, NY this past Thursday evening, after work.  They live about an hour and a half from the Adirondack Mountains.  Thanks to my father, as a kid, I spent a lot of time in those mountains.  It was there that he taught me the woodsman skills I have today:  How to hunt & fish, use a compass, build a fire, which berries to eat, and which ones to avoid etc.  While visiting with my folks these past three days, I made time to introduce her to a close friend but also scoot up into the great white north.  We stopped often, snapping photos along the way.  My friend had never been to the Adirondacks, so I showed her some of the nifty areas, the areas I was familiar with.  We stopped in Old Forge and kicked around the old hardware store, checked out the Adirondack Scenic Railroad and then pushed further north into Inlet, NY.  We grabbed a pizza and had a beer at the Screamin' Eagle (which was was pleasantly surprised to see has increased their tap selection from the three or four I had known, to over forty!). Warm and toasty inside, we watched as snowmobilers ripped up and down the street outside.  I wished we could have stayed longer.  It was a great trip and the snowy weather made for a classic Adirondack Christmas experience.

Merry Christmas folks!  If you're like me you've killed almost two bottles of egg nog this season and you've logged several hours of Christmas carrols.  Of course, if you're like me, you're also carrying a few extra pounds around and could stand to eat less cookies and more fruits & vegetables.  Regardless; happy holidays to you, my merry friends.  I wish you all good health, peace, lots of time spent with loved ones and many, many miles in the saddle.

It’s been a hell of a year for me.  A lot has transpired.  Some good.  Some shitty.  More good than shitty.  Though the shitty was quite shitty.  As a blogger, I share a lot of things with the world wide web.  A large variety of  interests and amusements ranging from hiking, biking & camping to book reviews, videos & music.  Homemade hot sauce and marmalade to abandoned buildings and subway stations.  What I don’t share are the more personal aspects of my life:  My anxiety and depression.  My failed marriage.  My melt-downs.  Nor do I mention the people in my life who help me through those times.  I am here today because of them.  I am sincerely thankful for them.  Why am I telling you this?  Because to me, sometimes this blog feels like a mask that I am hiding behind.  I just want people to know that, I too, have my lows.  I think that my blog sometimes has this It’s all good vibe to it.  I’m a real person like you; that’s all I’m trying to say.  I, too, am part of the rank and file who say:  Life has not gone the way I expected.  I never thought I’d find myself divorced.  I never thought I’d hurt the one I cared most about, or that she'd hurt me.  But as we all know, our path through life is one chock full o’ hardship and challenge.  It’s not easy and it’s not fair.  You can’t anticipate what lays ahead or prepare for the unforeseeable.  You can only carry on.  Move forward.  But it’s not all doom & gloom!

Back to the “More good than shitty.” part:  When I left Manhattan, I lost the friend I married.  Her wonderful family.  My dog.  But I also gained a new perspective on life and a sense of OK-ness.  That sense of OKness is strengthening little by little each day.   With these things; I also gained a great new job and a peaceful suburban neighborhood in the country.  I am minutes away from doing the things that make me the happiest.  And from that other part of my life; the shitty part, I take the best pieces.

This is a great video of Specialized Team, Gravity Rider Matt Hunter.  Makes me really jealous.  I need to get back into the woods!  In my opinion, this is the ultimate in epic adventures.  I don't see how it could get much better than this.
Specialized Hunter Lone Wolf from Keith White Audio on Vimeo.
at 12/07/2012 12:15:00 PM 1 comment:

This weekend in pictures

This weekend was a busy one.  I was happy to get out deer hunting on Saturday in Frederick, Maryland. I didn't have any luck, but still enjoyed being out in the woods. The weather was rainy with lots of fog which made for quiet navigation through the forest but I still didn't see anything.

After hunting, I took a trip over to Valley View Farms in Cockeysville and picked up some really great/funky ornaments.  I'm a big fan of retro/Dr.Seuss-looking ornaments.

On Sunday I cut down and brought home a Christmas tree from the farm located a half mile down the road.  The owner was really nice.  It was neat to learn that he sells trees, only three weekends out of the year as a side business.  His backyard, albeit huge, was filled with beautiful rows of evergreens and adjacent to that, a large field of grain. 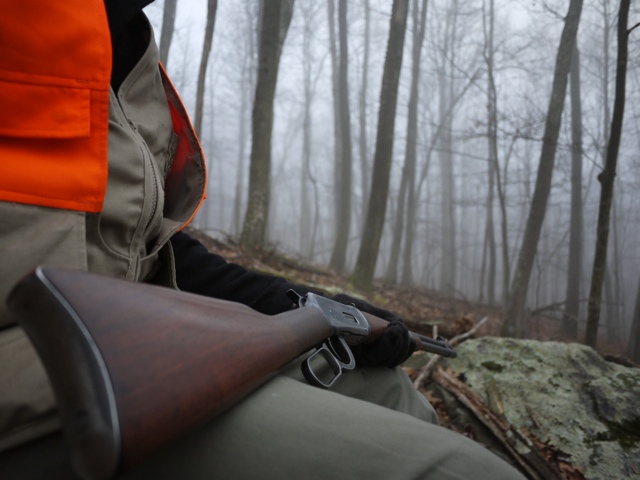 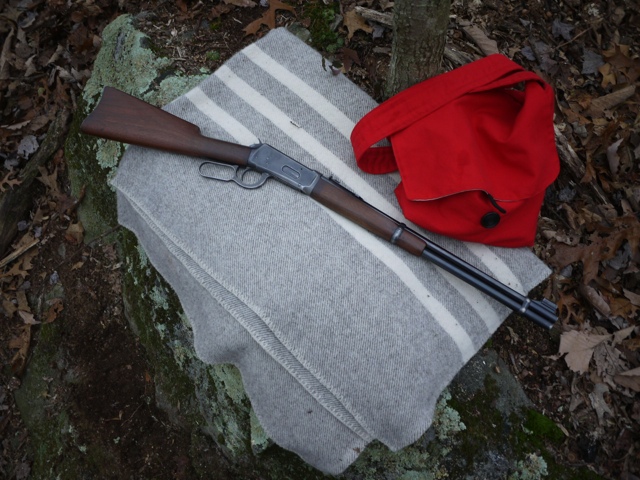 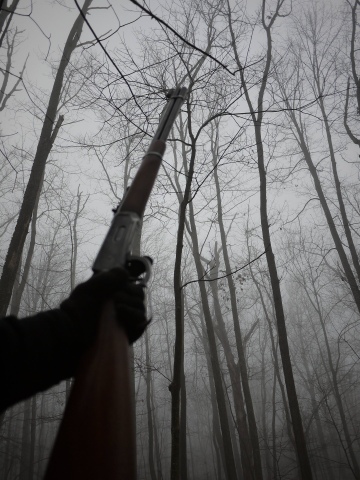 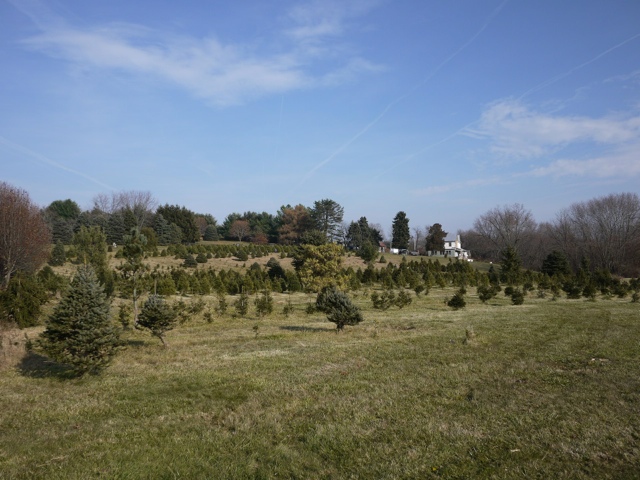 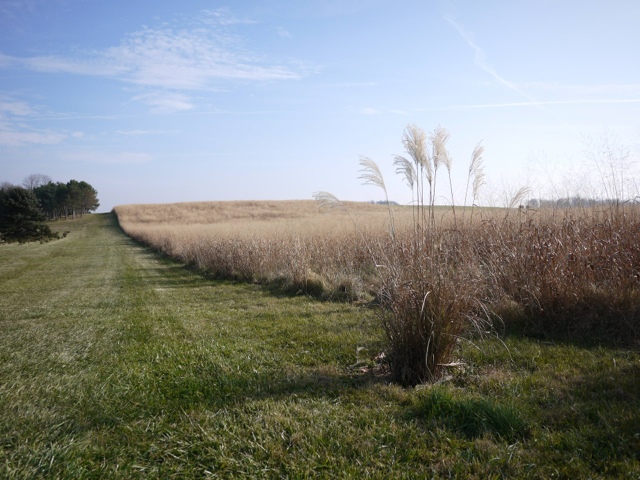 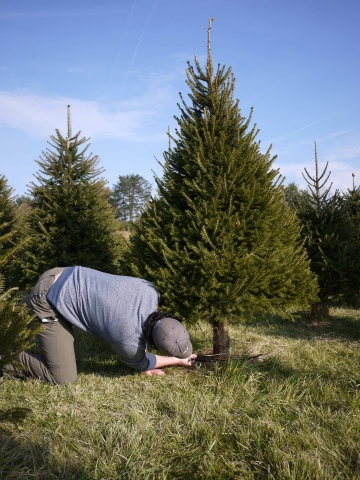 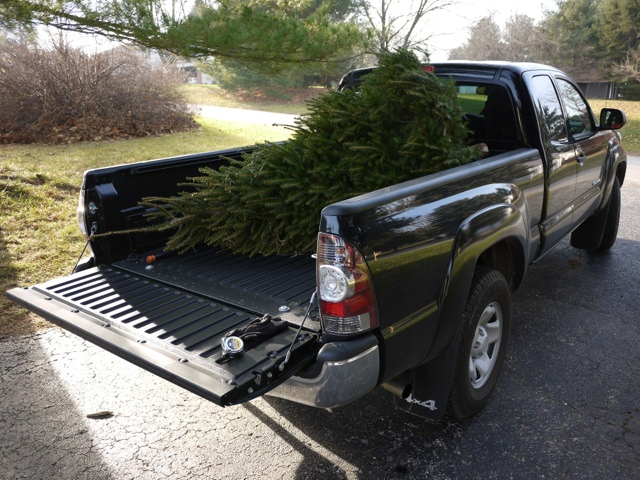 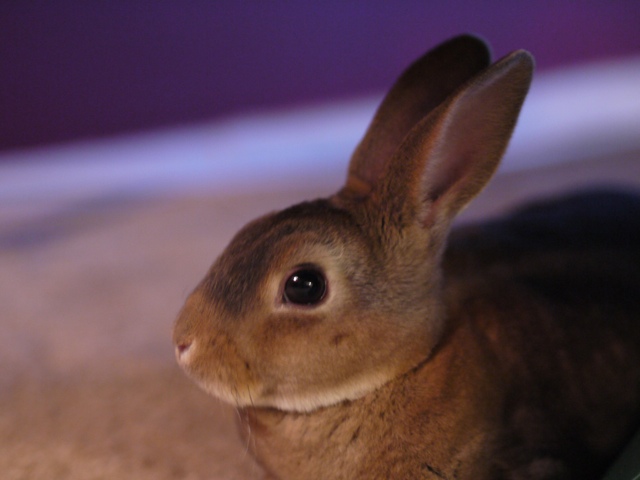 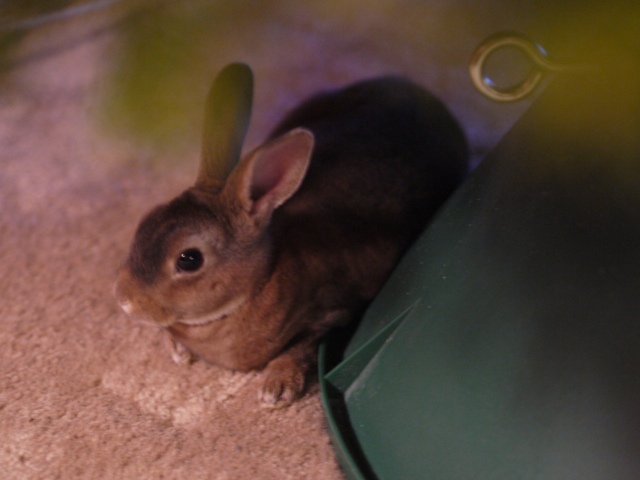