I know, I know, you hear it all the time, but seriously... watch out for cars! They're NOT looking out for you! You don't want to end up like Mr.Rat do you?

This rat is the record holder in my book. So far I've lived in Baltimore for 3 years and I've never seen a dead rat as large as this guy. Live ones; I've seen much larger...

If you know me, you know I love my fixed gear. It's simple... no brakes, one gear, clean lines, simplicity... purity. It's my main vehicle; I ride it to work and back everyday and use it to get around this city for all my needs: groceries, laundry, visiting friends, exploration rides with the cameras etc... I've had this bike for almost 2 years now and it's still runnin' just fine. But I give it some serious loving on a regular basis. Today I spent a couple hours tearing her down, degreasing, cleaning and re-lubing her completely. My hubs are butter smooth, as is my headset and pedals. My chain's tight. Wheels; true. Ready to rock. Below are some shots I took while I worked on my Bianchi today. Enjoy.

At least my morning rides rock.

With everything going on lately, I'm pretty stressed out. I, typically, seem relaxed about things around my friends even though I'm Kirkin' out inside. Sometimes the best thing to do in these situations is to get out and ride. Riding is great for either clearing your thoughts and thinking of nothing, or for analyzing current situations/challenges and forming a game plan.

Luckily for me I have plenty of time on the bike for doing either one of these things. This morning I woke up worried but pedaled through some thick Baltimore fog in cool 47° weather without a care about anything. I'm always happy to be on the bike with wind in my face, my tires hissing along on damp road while I dodge cars, dead rats and pot holes. For 20 minutes each morning and 20 minutes each evening, I'm completely free from everything. 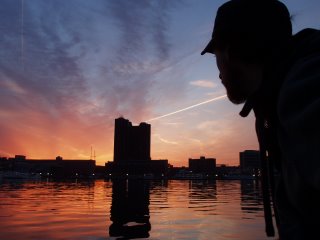 Sunday my girlfriend and I took a few laps around the lake up at Druid Hill Park. I've actually only ridden around the lake once, a few years ago, during an alley cat race. Needless to say, I hadn't remembered how nice it is up there. We probably went around 5 or 6 times. One lap around is 1.25 miles. We had perfect weather for our light, fun ride; it was a great day.

my girlfriend cruises around the lake...

Email ThisBlogThis!Share to TwitterShare to FacebookShare to Pinterest
Labels: Baltimore

Happy New Years! Hope 2006 starts out good and ends up great for you all.

For New Years Eve, my girlfriend and I spent it at the Movies. We went to the Muvico24 Theatre at Arundel Mills Mall and watched The Chronicles of Narnia, ate at Du Claw and then watched King Kong. Both awesome movies. I think I liked Narnia better...
I had a great time walking around Arundel Mills Mall. They had some really cool stuff there. Including a game that all the kids loved. - In the middle of one of the walkways in the mall was a pad upon which, games were projected. One game looked a lot like Air Hockey and you could actually "kick" the projected puck around the projected rink.

Here are two short video clips of this action:
Clip 1 (Quicktime .MOV)
Clip 2 (Quicktime .MOV)
I think next year we may do the same thing. Double movies, maybe even triple movies on New Years Eve would be great!