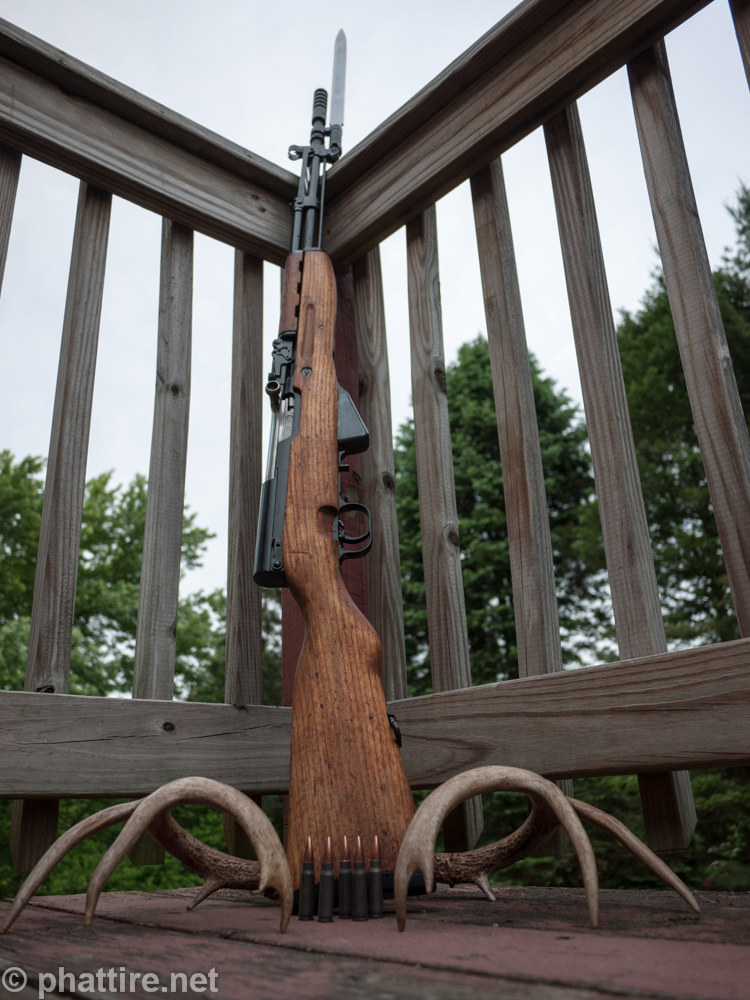 Just last week, I picked up a new military surplus rifle; a Yugoslavian made SKS M59/66. This is a soviet designed semiautomatic rifle chambered in 7.62X39mm. It holds ten rounds which can be fed individually or by means of a stripper clip. This Yugoslavian version of the rifle, features a grenade launcher at the muzzle and a folding ladder-sight for use when firing grenades. A special blank must be chambered by hand and fired to propel the grenade. What’s neat is that when you raise the ladder sight for the grenade launcher, the gas port to the gas chamber is blocked which prevents a round from the magazine from being auto-loaded, making the rifle, basically single-shot for the purpose of firing grenades. Clever; safe. This SKS was used extensively by the Soviets until it was replaced largely, by the AK-47 in the early 1950s and became a secondary rifle, although they are still used for ceremonies today. Based on the serial number of my rifle, I was able to determine that it was made in 1966, dipped in Cosmoline and preserved ever since. I am eager to get this rifle to the range, after having spent a lot of time working to remove the Cosmoline today. What is Cosmoline? Besides being a pain in the ass to remove, it is a wax-like rust preventative used for storage and preservation of firearms. Let me tell you; when they dip these rifles in Cosmoline, ite gets EVERYWHERE. The entire gas chamber and barrel was packed full. When I first pulled the action back at the gun shop, it gulped and sputtered as air and Cosmoline worked against my efforts. I could barely pull it back. Although today’s Cosmoline removal was a minor pain in the ass, it really wasn’t too bad and does not deter me from buying other neat “mil-surp” rifles ( I have my eye on the Mosin-Nagant). You basically just soak your disassembled rifle in mineral spirits.  Needless to say, it is very important to remove all of the Cosmoline from the rifle, or else you run the risk of seriously injuring yourself or others at the range.

As you can see in these photos, the Cosmoline is everywhere. It's sticky; not greasy, which is another reason why you need to be sure to thoroughly remove it from every nook & cranny. If you don't remove it from the firing pin in the bolt, you'll likely slam-fire all ten rounds out of the gun before you know what happened.

Just look at all that Cosmo on the gas rod! Removing it from the primary gas chamber was a real pain. I didn't want to soak the wood in Mineral Spirits and risk "bleaching" the color out of it.

A bottle of mineral spirits is all it takes to remove the Cosmo from the rifle. Let is soak for an hour or so and brush the parts using a brush having natural bristles. Give it a swish now and then but for the most part, just let them sit. When you're done, you just wipe them clean and give them a nice coating of Rem-oil. Let that Rem-oil soak back into the pores of the metal.

A 4" diameter length of PVC piping, capped at the bottom and stood on end, works great for soaking the barrel.

The stock is the most difficult piece to remove the Cosmo from. You need a hot sunny day to let that Cosmo heat up and rise out of the wood. I had read about several different methods of getting it out of the wood and chose the "dash board method". The Tacoma got pretty hot today and I was able to wipe the stock down a few times getting a bunch of Cosmo out each time. Still, this needs to be done a few more times. The stock is still "tacky" to the touch.

You need to be patient and really be sure that all the Cosmo is removed from pieces like the firing pin. I was satisfied when the pin would rattle loosely back and forth upon shaking this block.

Shown above are the ladder sight and grenade launching muzzle piece. Pretty neat!

I got crabs (Little Gasparilla Island)

A couple of  weekends ago, Debbie and I met some of her family for a vacation on Little GasparillaIsland off the southwest coast of Florida.  The island is only accessible by water taxi which made for a truly secluded and peaceful trip.  We spent 5 days laying in the sun, fishing, barbequing, walking the beach, swimming and enjoying some much needed relaxation.  The house we rented had a fabulous hammock on the screened-in porch, which is where I spent a majority of my time, though I took a lot of photos and attempted some time-lapse photography with my D800.  The time lapse photos didn’t amount to much, but I did enjoy sitting on the beach while my camera snapped frames of the setting sun, waves broke and the ocean breeze blew a brackish wind over me. As Hawaiian music played from my phone I sipped cold beer and the stress from the hectic world of work melted away.  Perhaps the highlight of the trip, for me anyway, was catching a few ghost crabs which scurry across the beach at night, and steaming them. People don’t usually eat these crabs because they are so small and don’t amount to much of a meal, but the crab-lover in me couldn’t resist trying them.  I steamed and ate three of them.  To be quite honest, they were delicious, albeit small.  The meat in the body was difficult to get out, but the legs and claws did have an appreciable and delicious quantity of very sweet meat!  Here are a few photos from the trip.

My girlfriend, Debbie, got me a fantastic, early birthday present in the form of a .22 caliber air rifle. I had been ogling over this rifle for quite a while and she was only too happy to “pull the trigger” for me. The QB79 is the Chinese version of the Crossman 160 which is no longer produced. The gun was purchased from Archer Airguns, which is owned by Stephen & Cornelia Archer operated out of Fairport, NY. As a quality assurance engineer, I am very pleased with the level of care and quality put in to their company. They offer a “gold service” for an additional $20.00, which entails a personal quality check of the gun’s operation to include a functional check of the rifle; a ten-shot qualification of the rifle at a distance of 10 yards where muzzle velocity is chronographed and recorded, along with average trigger pull. All of this data is recorded by Stephen Archer himself and provided to you on a record sheet neatly packed in the box with the rifle. Like I said, as a quality assurance engineer, this objective evidence is a personal perk. The only way this service could possibly be more pleasing, would be if they actually included a certificate of calibration from the chronograph used to sense muzzle velocity and for the scale used to weigh the pellets used during this qual-testing (But that’s just me being me). Hey, they even record the ambient temperature during testing. I think their operation is top-notch and worth every bit of $20.00.

The rifle, itself, is made in china by Industry Brand (Shanghai Air Gun Factory). There are no plastic pieces on this rifle, just steel, brass and hardwood which looks like cherry, though I am not certain. The rifle I spec’d out was a QB79 Custom, a .22 caliber rifle which features a “gold” trigger & bolt as well as a “target” barrel. The target barrel is free of open sights ad has a factory muzzle weight installed, thereby relegating it to be a scope-only rifle. Per my order, Archer Airguns installed a 9oz CO2 tank adapter and provided an empty 9oz tank. A full tank holds enough charge for 630 shots at 515fps, and cost me a whopping $2.99 to fill at my local Dick’s Sporting Goods. I also ordered a $40.00 UTG scope in 4X32 with a nice crisp mil dot reticle. I mounted the scope and had it zeroed in 15 minutes. Now I can sit on the back porch and land nickel sized groups on my target 40’ away. Never having owned a CO2 or pre-charged pneumatic rifle before, I can’t emphasize how nice it is to simply work the bolt and drop a pellet in the chamber rather than break the barrel or pump the rifle before each shot. Instead, I can sit back and put shot after shot down range at a consistent and reliable muzzle velocity! I very highly recommend this rifle and Archer Airguns. Thanks Debbie!

I’ve picked up a few rifles over that last couple of months. One of which, is the nicest little AR style, tactical .22s I have ever seen. Made by Rock Island Armory (RIA), in the Philippines, this is an incredibly well made rifle. The receiver is milled from a solid chunk of aluminum then anodized black while the barrel is made of ordinance steel and parkarized. The solid steel shroud was turned to leave a very smooth finish on it. RIA boasts that none of the pieces on their Mig 22 are cast or stamped out. Instead; they are all machined. The 15-round magazine for example, is made from 1/8” thick aluminum. It’s hefty and stout; like the rifle itself. The machining quality is clearly evident upon disassembly and cleaning of the rifle. I was amazed when I took it apart after my first trip to the range; this rifle’s internals are as beautiful as its external features. Speaking of the range; it performed beautifully. My buddy, Hoopsie, and I knocked bull after bull out of targets at the 50yd and 100 yard range. The trigger travel is quite short, and incredibly smooth. This is the only rifle I own which has a match-grade, free-floating barrel (rifled with a 1 in 16” twist) and from what I read, this largely accounts for the accuracy I enjoyed at the range.


RIA also, makes a target version of this rifle which has a longer picatiny rail for mounting larger scopes and features a folding bipod and leaner stock. It is equally sharp looking, yet I prefer the solid M-16 style stock which my Mig 22 has.