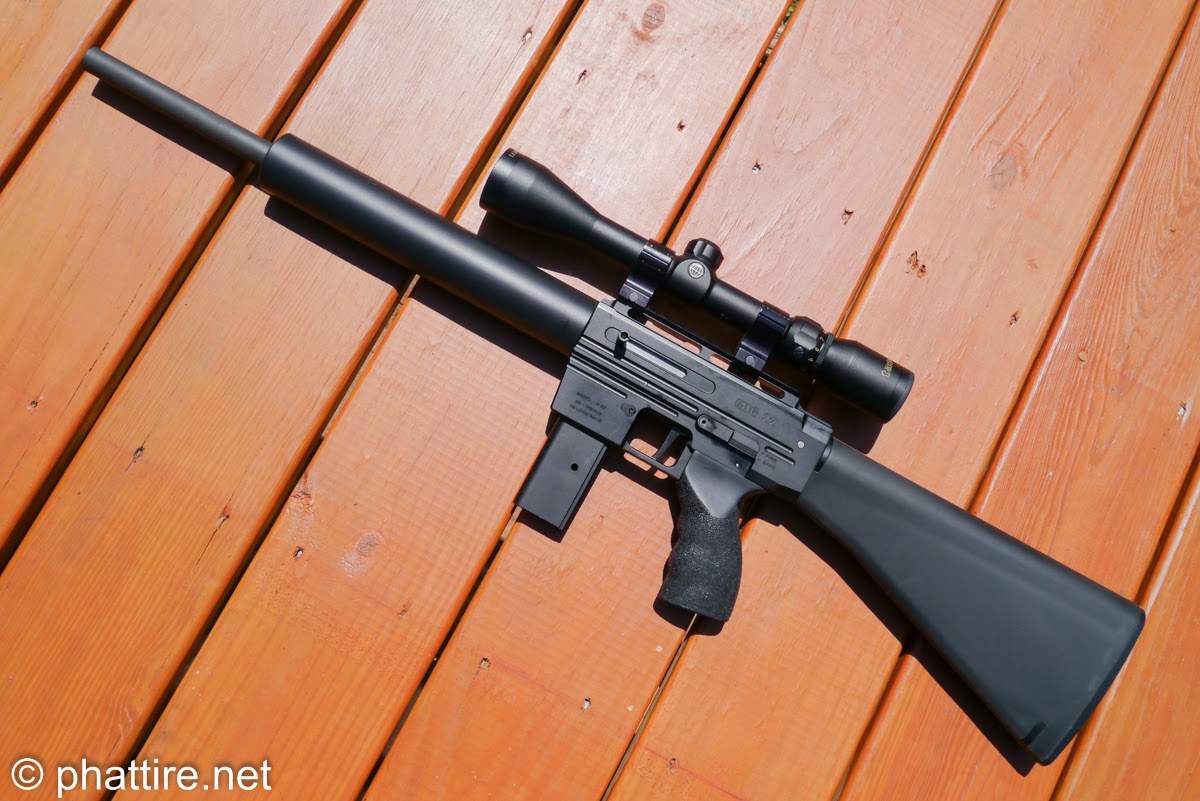 A bunch of guys from work invited me to go on their annual "company camping trip". They're all hunters and from what I've heard, the trip is basically a weekend in the woods, shooting skeet, pistols, and bow & arrow during the day, and roasting chickens over a spit & drinking at night. Sounds good to me! I'm going to bring my Rock Island Armory Mig 22 for this trip. With the amount of shooting I expect we'll do, I figured this was the most fun and economical route to take. But, I have recently removed the scope, so I needed to zero it again. I took it down to Hap Baker Firearms Facility yesterday morning and shot about 300 rounds through it. I have it zeroed for 25 yards, where it will hold a dime-sized group. I really love this rifle. Its a work of art and functions great, BUT, it has a serious Achilles heal. The barrel comes loose on my rifle after about 20 rounds. I have to unscrew the barrel shroud enough to access the small set screw and tighten it back down.  This set screw passes through a forward portion of the receiver and into a detent in the breach end of the barrel.  This screw is removed when you want to remove the barrel, consequently, it loosens during use and suddenly your shots are landing way off the mark.  Very frustrating.  I've used two different grades of loktite to rememdy the problem; both failed as fixes.  I now keep an allen key with this gun, when I carry it.  I hope someone at Rock Island Armory is reading this.

Blasts of the past 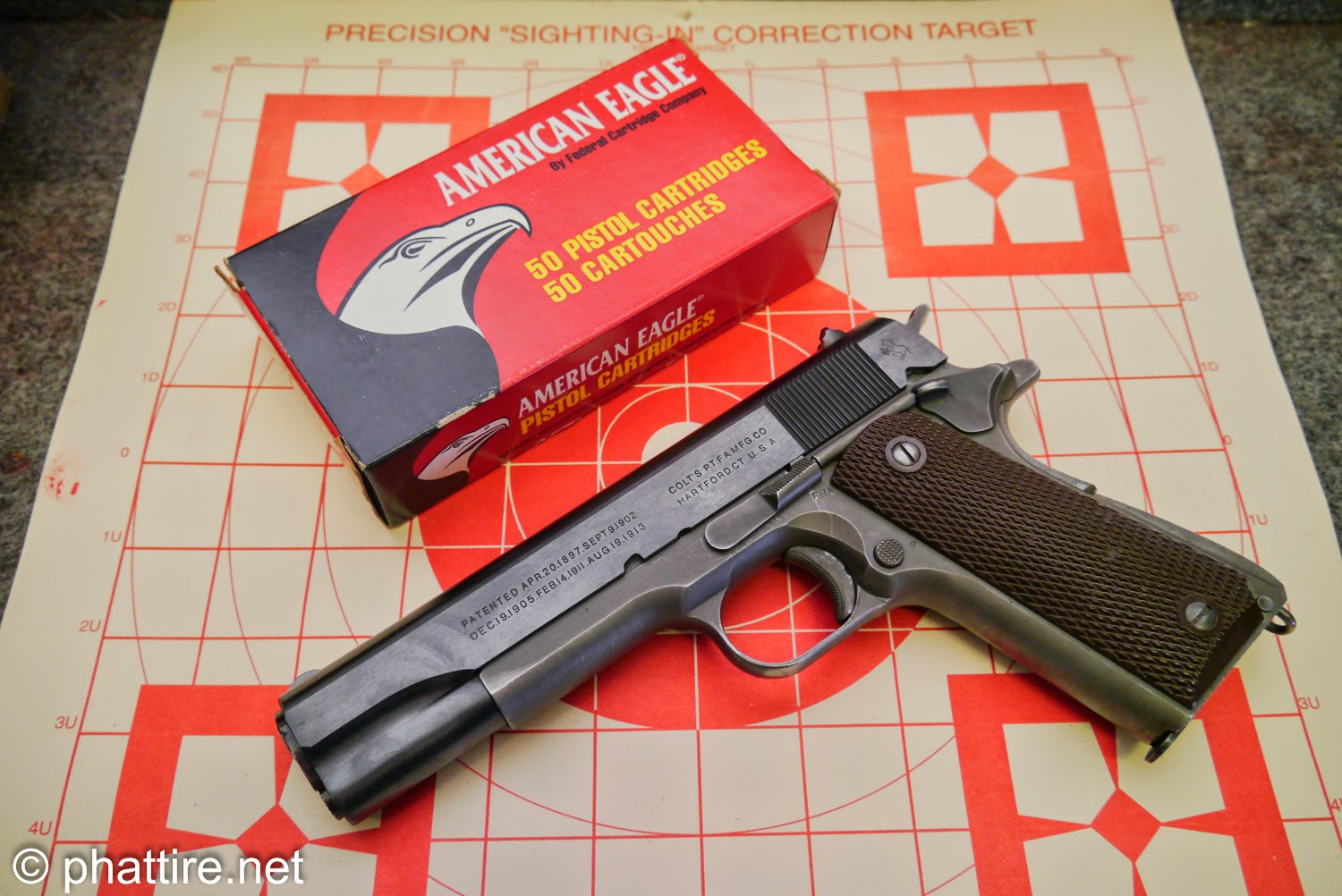 I picked up a few new pieces of "iron" over the last several months and have been itching to get them to the rifle range.  Yesterday, a beautiful 65°F Saturday morning, I finally got the chance.  I loaded up the truck and popped over to the Hap Baker Rifle Range, here in Westminster.  I like this range a lot.  It's local, well run, has target posting ranges (in increments of 50 yards) all the way out to 200 yards, and its very cheap.  Its just $10 for an in-county resident like myself.  I took with me, my Remington Model 81 in .300 Savage (1945).  Also, my Winchester Model 63 in .22 (1939). And my Colt 1911 A1 in .45 (1943).  A sucker for the older guns, I sort of had myself an old-timey session down at the rifle range.  These three pieces were all made during the same era.

I started off with the Remington Model 81 first.  I really love the shape of this rifle.  It's Remington's first semiautomatic, big game rifle.  Chambered in .300 Savage it really packs a punch.  The internal magazine holds four rounds.  Although, it was made in November of 1945, I was lucky enough to find this rifle with 95% of the original bluing in tact, and not a flaw to speak of in the stock.  It's a tank of a gun; very heavy.  One of John Moses Browning's designs, it does not use gas to operate the action, instead, it uses a long spring, around the barrel, shrouded by an outer jacket.  The action is very similar to that of Browning's 1911.  The barrel actually moves for and aft with each shot.  I find it neat that it utilizes a very large safety on the right side of the receiver.  Keep in mind that Mikhail Kalashnikov's AK-47 (which uses a very similar safety lever) debuted in Europe, shortly after the Remington released their Model 8's & 81's...

Curious to see how the Model 81 would handle, I loaded four rounds into the internal magazine, racked one into the chamber and lined up on my target 25 yards away.  Let me tell you, this gun packs a wallop!  I thought my featherweight Model 70 in .30-06 was damaging (to the shooter).  I'll be damned if this one isn't worse!  Granted; I was shooting in a T-shirt.  Again.  I sent the other three rounds, down range and ended up with a nice 1" group.  I'm happy with that.  No need to mess with the sights.  I then shot it at 50 yards and found myself shaking from the first four shots.  My shoulder was killing me.  I managed to hold a lousy 5" group.  This is good enough to put meat on the table, but otherwise could be a lot better.  I'll have to go back to the range with some shoulder padding and see how I do then!

Satisfied with how the old Remington semiautomatic performed (And not willing to subject my shoulder to it any more) I packed it away and brought the old Winchester .22 over to the bench.  This is a gun I've wanted since I was a little kid.  I just love the look of it's receiver, its feel in my hand, and the fact that it's Winchester's first semiautomatic .22 rifle.  I loaded ten rounds through the stock and set to work grouping shots at 25 yards.  Luckily, this rifle was shooting dead-nuts as far as left-to-right goes.  I say luckily, because my father replaced the front sight for me while I was last home.  Luckily, he tapped it into the grove in the barrel, centered enough that I didn't have to move it.  Elevation wise, it was a different storry.  At 25 yards, I was shooting an inch high of the bullseye.  I looked at the rear sight and saw that the elevator was moved all the way forward, yet still held the rear sight up and off of the barrel by about a 16th of an inch.  Just enough to cause my shots to land high.  With no way of lowering the rear sight, I just aimed an inch low and my bullets found their mark; no problem.

Finally, it was time to fire the 1911 A1.  This is a pistol that my father recently gave to me.  Made by Colt in 1943 it is the same model that was used in WWI and WWII.  I find that fascinating.  To think, that a gun of this design was being used, in a time when people still rode horses, or drove Model T Fords!  Anyway, it's no wonder that Browning's design is still copied today.  It's a beautiful piece.  Only having 50 rounds of .45 ammo.  I shot only a few magazines through it.  I have to say, I'm awful with a pistol.  I need a lot more practice.  At 10 yards, I think I held a 6" group.  Good enough for self defense, but it definitely needs improvement!